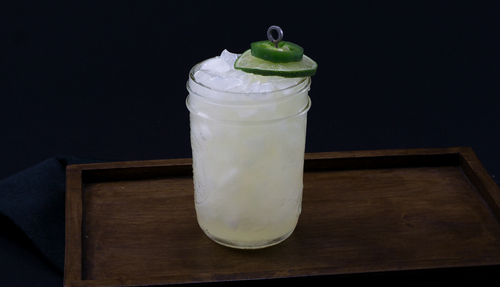 Created at Please Don’t Tell—a speakeasy in New York—el burro is cleverly named after the recipe it riffs on: the Moscow Mule. As their recipe book explains, el burro means donkey in Spanish, a reference to both the pack animal as well as the below-the-border palette it employs. Soda-pop cocktails are a dangerous art: the intense sweetness and bold flavors can easily overpower everything included. This is a boon at smelly rock n’ roll clubs, where mediocre whiskeys and vodkas need a cheap and simple companion, but in the world of jiggers and barspoons, the role of soda-pop is a precarious one. An overzealous top-off might completely disrupt the whole drink, reducing a smart combination of expensive ingredients into a humble “whiskey coke”. Smartly, el burro requests a small portion of ginger beer, and combines it with equally boisterous flavors, resulting in a satisfying, complex, and wonderfully refreshing highball.

Ginger beer is a world unto itself, with countless options decorating grocery store shelves. Goslings is excellent and widely distributed. We’ve had good luck with Fever Tree too. That said, when Reed’s is available, we don’t think twice. This recipe requests that the beer be shaken with the drink, which seems strange at first, but probably helps dilute and disperse the powerful ginger flavor. The original recipe requests reposado tequila specifically, though we imagine it working just fine with blanco tequila. We’ve seen several different garnishes on this drink: candied ginger, lime peels, and jalapeno wheels. Of the three, we like jalepeno best. The spiciness adds an element of surprise, and the vegetable notes create an extra layer of complexity. We like this drink over crushed ice, but it would be good over cubed ice too. If you want crushed ice, just give a handful of cubes several whacks over the counter in a plastic bag. Serve this drink in a tall glass or—for maximum summer excitement—a small mason jar.